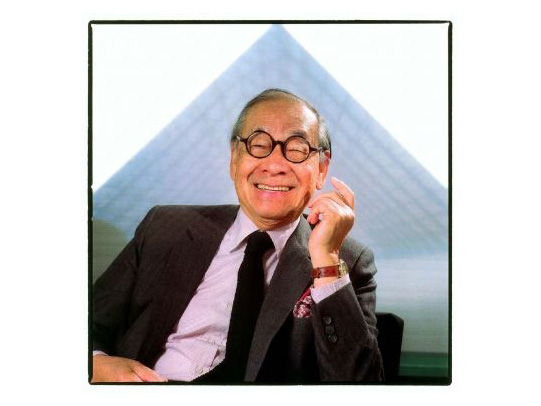 In 2014, the International Union of Architects (UIA) will award its Gold Medal to the Chinese born American architect, Ieoh Ming Pei.

In attributing the most prestigious of the UIA awards to Professor Pei, the UIA thus recognizes an architect whose “life and work spans the history of modern architecture over five continents for more than sixty years. The UIA thus honours his unique style, his timeless rigor, and his spiritual connection to history, time and space.”

Ieoh Ming Pei was born in Canton, China in 1917. He arrived in the United States in 1935 and studied architecture at the Massachusetts Institute of Technology, from which he received a Bachelor of Architecture in 1940. After studying under Walter Gropius at Harvard University, he received a Master of Architecture in 1946. In 1954, he acquired American citizenship and founded, in 1955, his own agency with two associates, Eason Leonard and Henry Cobb.

The John Fitzgerald Kennedy Library in Boston, the East Building of the National Gallery of Art in Washington and the Bank of China Tower in Hong Kong marked the beginning of a long career punctuated by prestigious edifices in the United States and in the great capitals of the world.

Dozens of preeminent structures bear his signature, among which the extension of the Louvre Museum in Paris, with its famous glass pyramid nestled at the heart of the illustrious historic ensemble (1989), the National Museum of Art in Washington, the Johnson Museum of Art in New York (1973) and the Museum of Islamic Art in Doha, Qatar (2008).

Ieoh Ming Pei has received the most prestigious accolades that can be bestowed on an architect, notably the Gold Medal of the American Institute of Architects (AIA) and of the Royal Institute of British Architects (RIBA). On 6 August 2014, he will receive the UIA Gold Medal at the awards ceremony organized in conjunction with the UIA World Congress of Architecture in Durban, South Africa.

The UIA Gold Medal is the most prestigious distinction attributed to an architect by architects, selected from among nominationssubmitted by professional organizations from around the world. This truly international procedure exemplifies the values of the UIA: professionalism, cultural diversity and independence. It is free from all forms of discrimination, special interest or partisanship. The jury is composed of the UIA Bureau Members. The jury for 2014 met in Melbourne, Australia on 5 May 2014. It included: Albert Dubler, President, Louise Cox, Past President, Michel Barmaki, Secretary General, Patricia Emmett, Treasurer, and Vice-Presidents Antonio Raffaele Riverso, Deniz Incedayi, Thomas Vonier, Mohamed Esa and Ali Hayder.