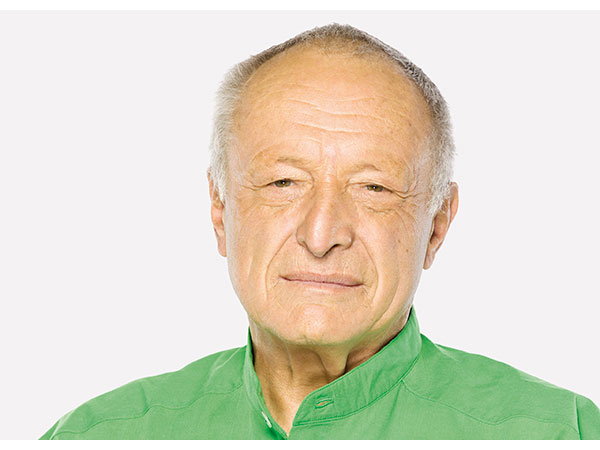 The 2007 Pritzker Prize Laureate advocates architecture and urbanism to create livable cities, enhance the public realm, and improve the environment.

Chicago — Tom Pritzker, president of the Hyatt Foundation, announced today that London-based architect Richard Rogers has joined the jury of The Pritzker Architecture Prize. Mr. Pritzker said, «Richard Rogers understands architecture in its larger context and is deeply committed to its crucial role in creating livable cities.» Richard Rogers is the 2007 laureate of the Pritzker Architecture Prize, and Tom Pritzker added, «In addition to being a Pritzker Laureate, Richard’s humanist perspective will make a substantial contribution to the jury and the message that is the core of the Prize.”

From his studio in London, Lord Rogers said, “It is an honor to be invited to join the jury of the Pritzker Architecture Prize, the most prestigious international Architecture Award for a living architect. I continue to be inspired by architects from around the world, and it will be thrilling to be able to review the best of the best with my fellow jurors.”

Lord Peter Palumbo, the chair of the Pritzker Prize jury, said, “Richard Rogers is an architect, an urbanist, and a humanist of the highest order, whose appointment as a jury member of the Pritzker Prize will be widely welcomed, both in the world of architecture and by everybody connected with the prize. On a personal level, I am particularly pleased that Richard has found the time in a very crowded agenda to commit to the prize. The experience and wisdom that he will bring to the table is a hugely valuable resource.»

Richard Rogers’ practice — Rogers Stirk Harbour + Partners (formerly Richard Rogers Partnership) — was founded in 1977 in London and has offices in Sydney and Shanghai. It is best known for such pioneering buildings as the Centre Pompidou (with Renzo Piano), the headquarters for Lloyd’s of London, the European Court of Human Rights in Strasbourg, France, and the Millennium Dome in London. The practice has worked, or is currently working, on a wide range of projects, including Maggie’s Centre in London, Terminal 4 at Madrid Barajas Airport, Terminal 5 at London’s Heathrow Airport, the Leadenhall Building in the City of London, one of the office towers on the World Trade Center site in New York, two office developments in Washington D.C., mixed-use developments in Seoul and Florence, major residential developments in Taipei and in the United Kingdom, and an extension for the British Museum in London. The practice has extensive experience in urban master planning with major schemes in London, Lisbon, Berlin, New York, and Shanghai. It is participating in the Greater Paris project, which looks at the future of the city as a more integrated metropolitan region as it faces the social and environmental challenges of the 21st century.

The 2007 Pritzker Architecture Prize jury citation for Richard Rogers states that “key Rogers projects already represent defining moments in the history of contemporary architecture” and notes that “his championing of energy efficiency and sustainability has had a lasting effect on the profession.” Also highlighted by the 2007 jury is how “throughout his long, innovative career, Rogers shows us that perhaps the architect’s most lasting role is that of a good citizen of the world.”

In addition to the 2007 Pritzker Architecture Prize, Rogers received the RIBA Gold Medal in 1985, the 1999 Thomas Jefferson Memorial Foundation Medal, the 2000 Praemium Imperiale Prize for Architecture, and the 2006 Golden Lion for Lifetime Achievement (at La Biennale di Venezia). He was awarded the Légion d’Honneur in 1986, knighted in 1991, made a life peer in 1996, and a Companion of Honour in 2008.

In 1995, Rogers was the first architect ever invited to give the BBC Reith Lectures — a series entitled ‘Cities for a Small Planet’ — and in 1998 was appointed by the Deputy Prime Minister to chair the UK Government’s Urban Task Force on the state of our cities. He was Chief Advisor on Architecture and Urbanism to the Mayor of London, Ken Livingstone, and has played an advisory role on design to the current Mayor of London, Boris Johnson. He has also been an Advisor to the Mayor of Barcelona’s Urban Strategies Council.

He has served as Chairman of the Tate Gallery and Deputy Chairman of the Arts Council of Great Britain, and is currently an Honorary Trustee of the Museum of Modern Art in New York, Trustee of Médecins du Monde UK, and President of The National Communities Resource Centre.

Pritzker Architecture Prize jury members serve for multiple years to assure a balance between current and new members and are entrusted with selecting the laureate each year. No outside observers or members of the Pritzker family are present during jury deliberations and voting. The international jury members are recognized professionals in their own fields of architecture, business, education, publishing, and culture. The Pritzker Architecture Prize honors a living architect or architects whose built work demonstrates a combination of those qualities of talent, vision, and commitment, which has produced consistent and significant contributions to humanity and the built environment through the art of architecture.

The Pritzker family of Chicago established the international prize through their Hyatt Foundation in 1979. The Hyatt Foundation sponsors the prize, which is granted annually. It is often referred to as “architecture’s highest honor.” The award consists of US $100,000 and a bronze medallion, conferred on the laureate at a ceremony held each year at an important site throughout the world.

The 2015 Pritzker Architecture Prize Laureate is scheduled to be announced in March 2015.