African Masquerade Rituals and Spiritual Realms are Unmasked at the Boca Raton Museum of Art.

Museum goers will be spellbound by the transformative power of the African masquerade, as the Boca Raton Museum of Art presents Phyllis Galembo: Maske.

For more than 30 years, the artist has traveled around the world to photograph participants in contemporary masquerade events that range from traditional, religious ceremonies to secular celebrations.

The exhibition opens January 28 and is on view through May 31. On May 17 at 3:00 p.m., Galembo will visit the museum to share personal stories about her work and her travels, the ritual mask ceremonies, and will sign two of her books at this personal appearance–Maske (published by Aperture), and Mexico, Masks and Rituals (by Radius Books and DAP). 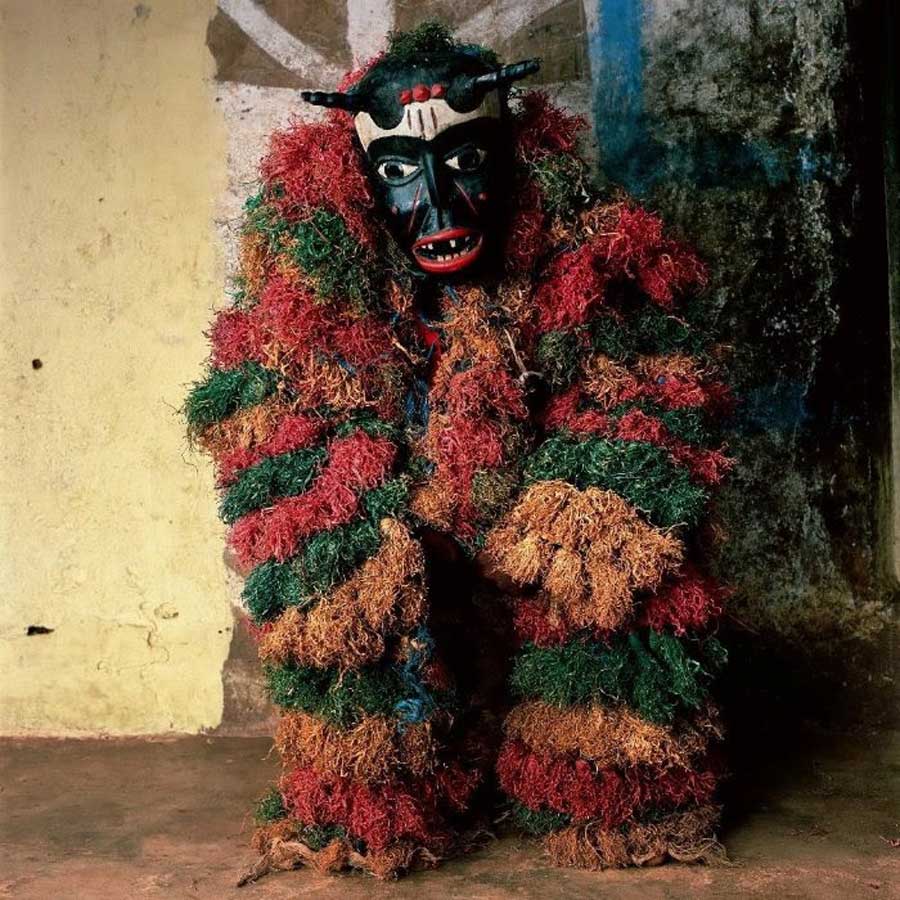 Her portraits are celebrated by the world’s leading fine art photography editors for their stunning resonance, setting her work apart from documentary and anthropological studies.

They will be shown in concert with the Museum’s historical collection of more than 40 African tribal artifacts and indigenous masks in the gallery across from Galembo’s show, for a complementary perspective. 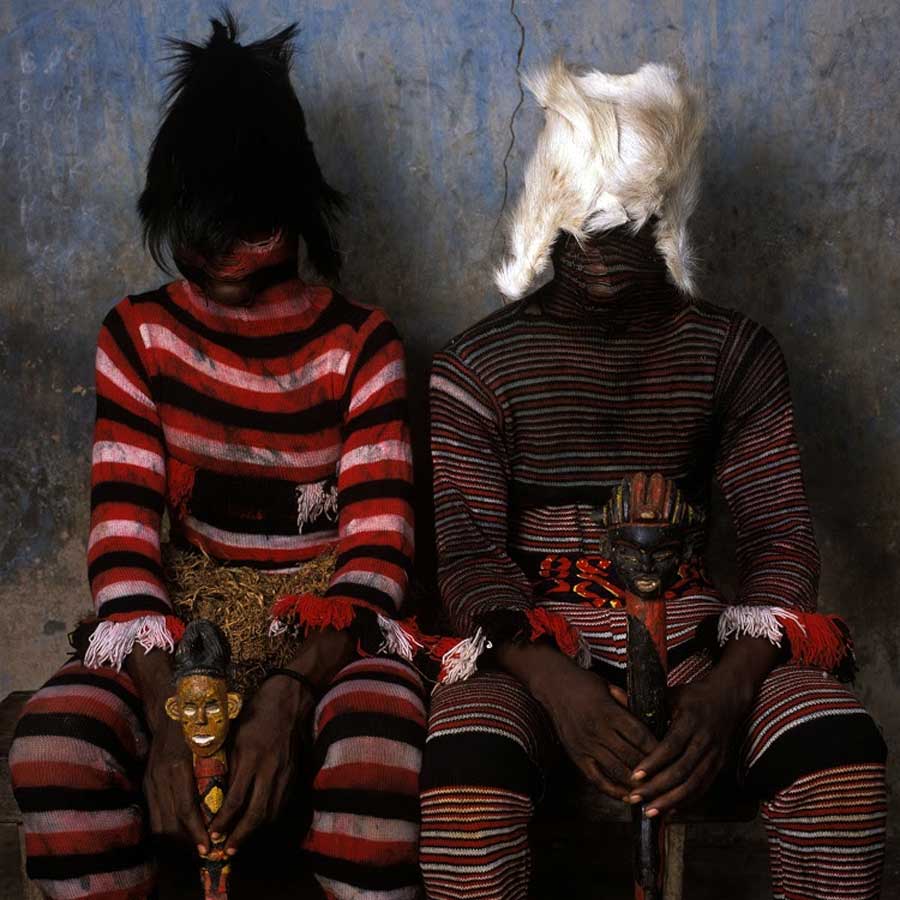 Through her lens, the viewer gains special access to the rarely seen other-worlds, as she captures the raw and sometimes frightening aspects of ceremonial garb. Masking is a complex, mysterious and profound tradition in which the participants transcend the physical world and enter the spiritual realm.

In her vibrant images, Galembo exposes an ornate code of political, artistic, theatrical, social, and religious symbolism and commentary.

She has made over twenty trips to sites of ritual masquerades, capturing cultural performances with a subterranean political edge.

Her photographs depict the physical character, costumes, and rituals of African religious practices and their diasporic manifestations in the Caribbean and Mexico. Galembo’s images reflect both the modern and ancient worlds.

The fifteen portraits by Galembo that were selected for this exhibition reveal the meticulous detail and creative imagination of mask-making. 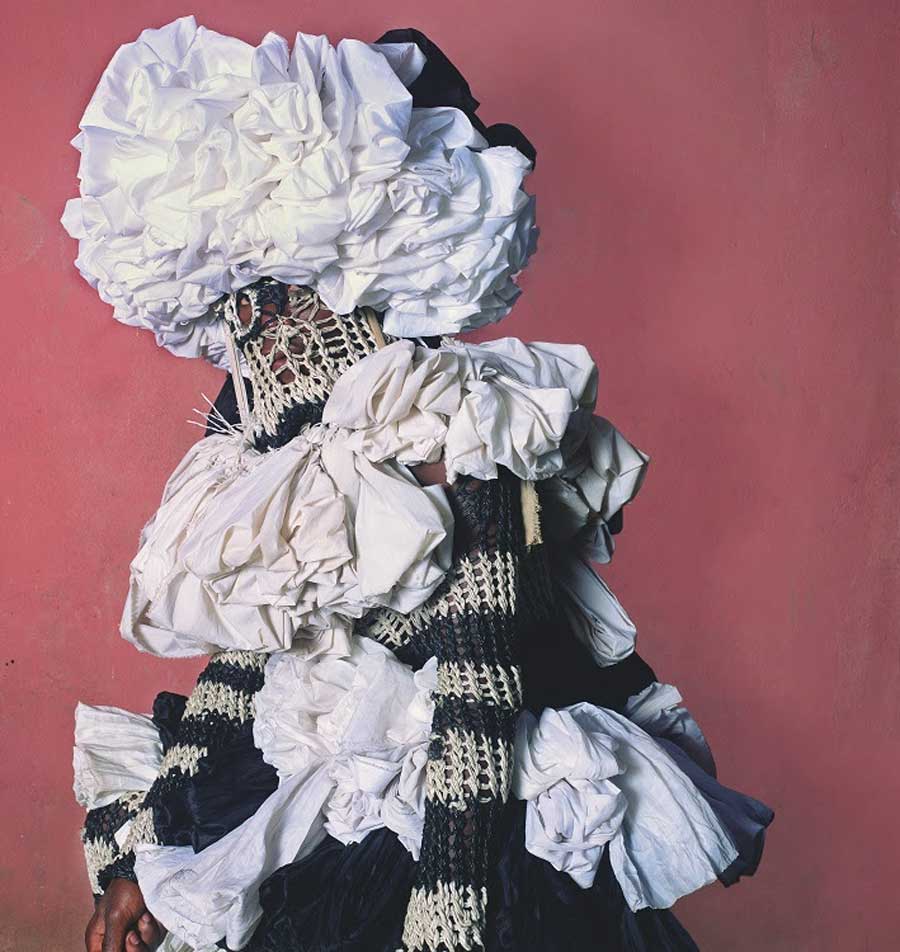 “The tradition of masquerading is universal and timeless, and continues today in most cultures, including western societies,” says Irvin Lippman, the Executive Director of the Boca Raton Museum of Art.

“Bringing together the Galembo photographs and masks from the Museum’s African collection underscores the cross-cultural complexity of meaning and purpose. However, what they have in common is their vitality, power, and boldness of humanity.”

The costumes in Galembo’s photographs are worn in several types of modern-day rituals. They are created to summon ancestral spirits and deities during a range of events, including agricultural hardships, land disputes, rites of passage, funerals, harvests, moments of gratitude and celebration. 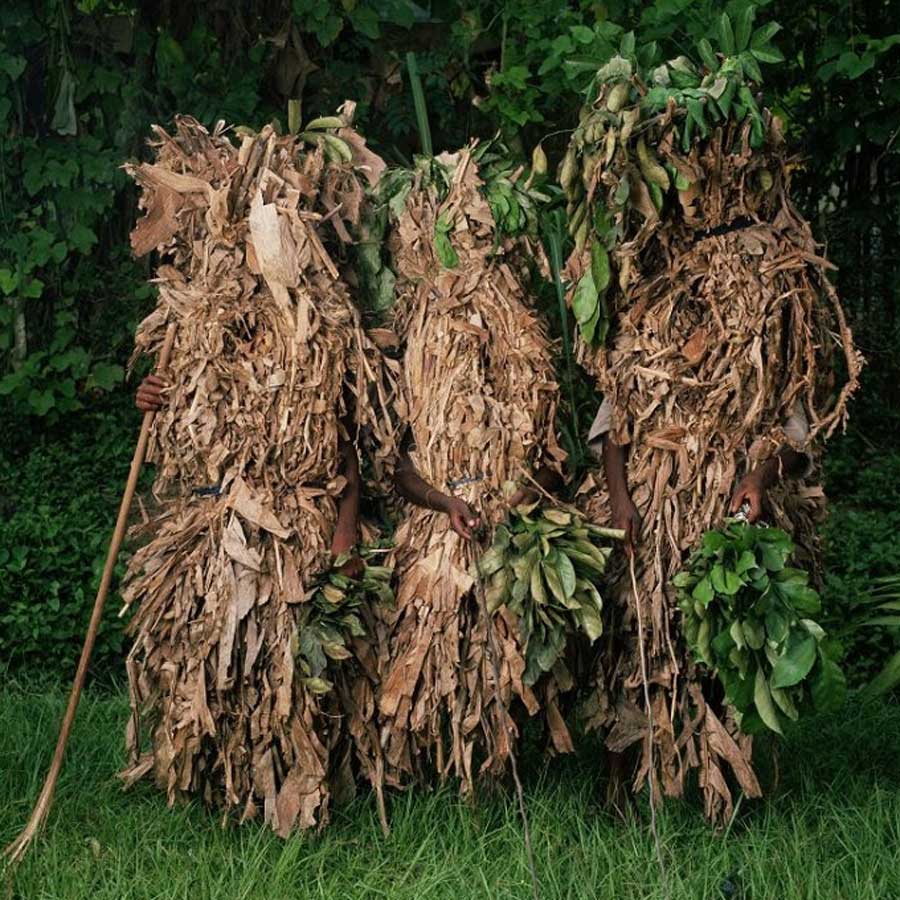 While traveling and embedding herself for long periods in these societies, Galembo works with local assistants and translators.

They negotiate the terms with elders, so that she may be granted permission to make photos of these masqueraders.

“The translators often find that gaining permission from community leaders can sometimes be quite helpful during these painstaking negotiations,” says Galembo. “Once an agreement has been struck, I set my own lighting and place the subjects in front of a neutral backdrop that enables the eye to focus on the diversity of materials in each costume.”

The masks and costumes in these photographs are made from a wide variety of surprising materials ─ leaves, grass, patterned fabrics, burlap sacks, full-bodied crocheted yarns, colored raffia, quills, shells, and even lizard excrement.

All of her photographs are shot as portraits rather than during the act of ritual. She is allowed to photograph her subjects at the very moment right before their rituals and festivities commence.

Galembo prefers her colors to be brightly saturated, enhancing the spiritual and transformative powers of these garments.

“I never see my subjects out of costume, although the masqueraders are always men, often paying homage to women,” adds Galembo. 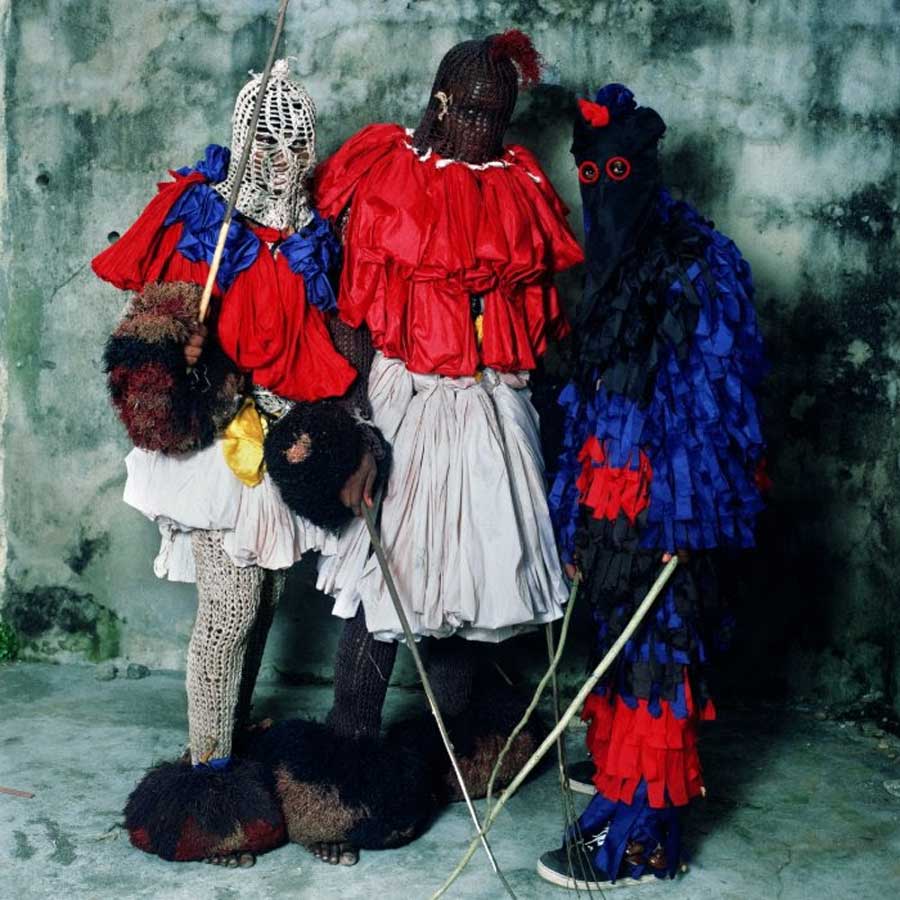 Despite secularization and fading traditions, masquerading in Africa is abundant, robust, and far from disappearing.

Most of the photographs in this exhibition reflect sacred rituals, the spiritual aspect of masquerading rather than secular celebrations.

By donning garments, the masqueraders gain access to traditional knowledge, enabling them to relay critical messages to the community. 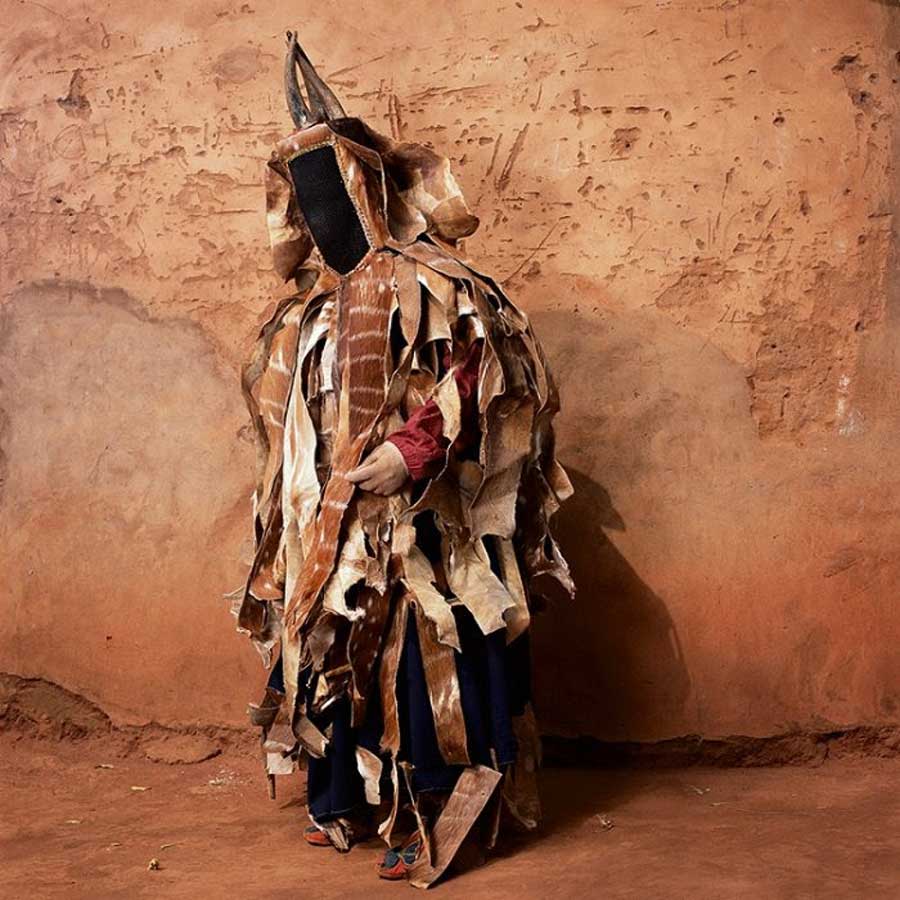 “I like the way viewers can grasp the real stories behind each image. Every mask, costume and fiber of material can represent so much to the people in these portraits. Many of these subjects created these ritual costumes because a spirit inspired them. These are people who make masks and costumes that are very spiritually motivated,” says Galembo.

The modern world also finds its way into these costumes and masks with the usage of plastic bags, cardboard, and found objects.

Awo-O-dudu (A Spirit They Saw) reveals a ghost- like shape summoning ancestral spirits during the dry months or times of crisis, when spirits are called to bless the deceased and entire villages.

Ko S’Ogbon L’Ate (You Can’t Buy Wisdom at the Market) is a tribute to mothers, goddesses and ancestors. The wooden headpieces represent an animal and a human, each sings a different song during the ritual.

Affianwan (“white cat woman”) represents spirit and transparency. The stunning headdress of this work is crocheted from one long flowing piece of fabric.

Two in a Fancy Dress and Rasta illustrates the cross of African and European traditions (fancy dress).

More About the Artist: Phyllis Galembo
Phyllis Galembo’s photographs are included in numerous public and private collections including the Metropolitan Museum of Art and the New York Public Library. She is represented by Axis Gallery.

She was born 1952 in New York, where she continues to live and work. Galembo graduated with a Master of Fine Arts from University of Wisconsin at Madison in 1977 and has been a Professor Emeritus at Albany, State University of New York since 1978. Using a direct, unaffected portrait style, she captures her subjects informally posed but often beautifully attired in traditional and ritualistic dress.

Attuned to a moment’s collision of past, present and future, Phyllis Galembo is recognized for her ability to find the timeless elegance and dignity of her subjects.

She highlights the creativity of the individuals morphing into a fantastical representation of themselves, having cobbled together materials gathered from the immediate environment to idealize their vision of mythical figures.

While still pronounced in their personal identity, the subject’s intentions are rooted in the larger dynamics of religious, political and cultural affiliation. Establishing these connections is the artist’s hallmark.

Her work has appeared in Tar Magazine, Damn Magazine, Photograph and Harpers. She has been profiled on CNN, NPR Radio and NBC Today.

Other collections that feature her work include: Oceania and the Americas, Photography Study Collection (New York); the Philadelphia Museum of Art; the Houston Museum of Art; the International Center for Photography (New York); the British Art Museum, Yale University; Schomburg Center for Research in Black Culture, New York Public Library; Polaroid Corporation (Boston); and the Rockefeller Foundation, among many others.

More about the museum’s African collection
Complementing Galembo’s exhibition are more than 40 African tribal artifacts from the Museum’s collection, including headdresses and masks, each pertaining to masquerades and ceremonies. These are exhibited in an adjacent gallery, across from the Galembo show.

The two Kuba masks in the collection (Kuba Bwoom Mask and Kuba Ngaady-A Mwash Mask) are both from the Democratic Republic of Congo, recreating the Kuba dynastic history.

Another work in the museum’s African collection, a Bamana Headdress (Chiwara), represents a mythical character who taught humans to turn wild grasses into grain.

A Mossi Nakomse Headdress (Zazaido), is used in secular and religious rituals by young men. The Zazaido masquerade honors male and female elders at funeral ceremonies, and blesses survivors.

A Yoruba Crown from Nigeria is worn on state occasions, and reflects the spiritual connections of the ruler. The face represents his royal lineage and ultimately the god Oduduwa, who remained on earth and became their first king.