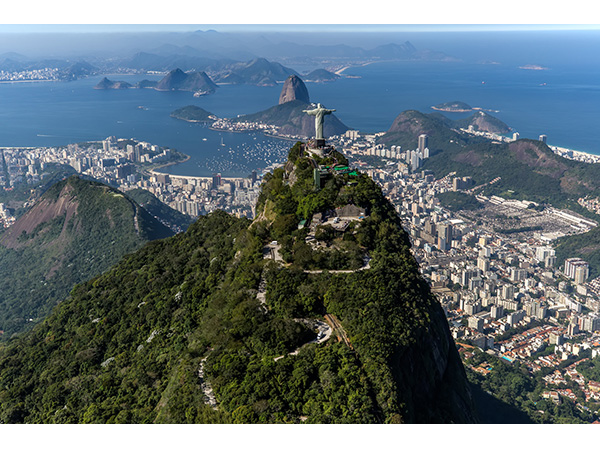 The growth of large urban areas and its consequences to the environment is one of the subjects of the Green Nation Fest that will take place from September 6 to 14 in Rio de Janeiro. The interactive festival will offer shows and encourage visitors, in a fun way, to contribute to a better world.

With entertainment for all the ages, the event will use audiovisual elements, entertainment and education to deal with the topic of environmental issues. Between the five displays which are part of the Interactive /Sensorial Fair – ThyssenKrupp’s Panoramic Elevator Simulator – «The River seen from the sky» -will take visitors on a journey through time in Rio de Janeiro from the past into the future.

The event will include a cinema exhibition, seminars about the green economy, creative workshops and the Green Nation Cup which will gather former football players and artists for a football tournament. This tournament will utilize a special ball that generates energy when kicked. The festival will also present the Wildlife Photographer Exhibition from the National Museum of Fine Arts.

The Green Nation Fest is organized by CIMA – Centro de Cultura, Informação e Meio Ambiente [Culture, Information and Environment Center], a NGO that for over 20 years has been developing actions in partnership with private, governmental and multilateral institutions. Green Nation is a movement that cares about life quality and resulted in the biennium event Green Nation Fest, this year it is the second edition. The first one, in 2012, was visited by 50 thousand visitors.

Providing better solutions for growing demands
The sustainable urbanization is inevitable for those who live in or visit big cities. In 2014, 54% of the world’s population (approximately 3.9 billion people) lived in cities and as of 2014 there were 28 global mega-cities with more than 10 million people according to the 2014 World Urbanization Prospects of the United Nations. By the end of this century, around 80% of the world will inhabit urban spaces. This first metropolitan century will see global populations reach between 10 and 11 billion people. The sustainable development of buildings, vehicles and production systems depends on integrated planning, which involves collaboration from project conception through end of life. This represents an opportunity for ThyssenKrupp as the company offers products and services which meet the growing demand for doing «more», i.e., more mobility and more consumer goods; while using resources efficiently – to lessen their environmental impact.

ThyssenKrupp offers solutions company-wide that have a low-impact on the environment. Among them, ThyssenKrupp Elevators’ regenerative energy system, a technology capable of reducing up to 30% of an elevator’s energy consumption in a building. The system feeds part of the energy generated by the elevator back into the building’s overall energy supply. This system was recently used in the Eldorado Tower in Sao Paulo: ThyssenKrupp delivered highly efficient elevators and escalators contributing to the very first LEED (Leadership in Energy and Environmental Design) platinum building certification in Brazil.

About ThyssenKrupp Elevator
The Elevator Technology business area brings together the ThyssenKrupp Group’s global activities in passenger transportation systems. With sales of 6.2 billion euros in fiscal 2012/2013 and customers in 150 countries, ThyssenKrupp Elevator is one of the world’s leading elevator companies. With more than 49,000 highly skilled employees, the company offers innovative and energy-efficient products designed to meet customers’ individual requirements. The portfolio includes passenger and freight elevators, escalators and moving walks, passenger boarding bridges, stair and platform lifts as well as tailored service solutions for all products. Over 900 locations around the world provide an extensive sales and service network to guarantee closeness to customers.