The exhibition Verde Prato (Green Prato), curated by Elisa Cristiana and Emilia Giorgi, which will set the stage for the Piano Operativo (the Urban Regulation) of the Municipality of Prato and the multitude of actions and strategies implemented in recent years to define the new instrument for the Tuscan city’s urban policies, will open at the Centro per l’arte contemporanea Luigi Pecci on Tuesday 19 March at 6:00 pm. It is an experimental and innovative project, the result of intense team work by the Municipality of Prato’s Ufficio di Piano which boasts of valuable contributions from international experts such as the architect Stefano Boeri and the scientist Stefano Mancuso, to mention just a few.

The exhibition design, by the Fosbury Architecture collective, will present heterogeneous materials such as drawings, maps, design documents, historical photos and video through a scaffolding system conceived as a scenic machine. A tale that unfolds through texts and images along the creative process that aims to transform Prato into a green, European and open city, integrating the nature system with the built environment. In addition to the focus on town planning aspects, the exhibition will present an installation devised for the occasion by Stefano Mancuso, photographic projects by talents such as Fernando Guerra, Maurizio Montagna and Delfino Sisto Legnani, and an interactive robotic machine that allows the public to navigate the various elements of the Piano Operativo. The exhibition is completed by an area designed as a meeting spot and a space for taking part in educational activities, conferences and round tables, turning the exhibition into a place of debate, a living square inside the museum.

The Piano Operativo of Prato is an innovative Town Planning tool drawn up by the Ufficio di Piano and adopted in September 2018. It is based on the great experience transmitted by the Prato legacy of the urbanist Bernardo Secchi at the end of the Nineties. Prato is observed in its metropolitan dimension and induced to relaunch the manufacturing heritage and re-evaluate the natural heritage, surpassing the division between the city and agricultural spaces thanks to wide-ranging management. The challenge, also conducted thanks to an extensive participation programme, “Prato al Futuro” – which involved all the citizens and saw the Municipal Administration in dialogue with architects, stakeholders and associations – is to promote the reuse of the city, reducing new land consumption, and develop an urban forestation project, using ecology to respond to the global challenges of climate change and local challenges involving the well-being of residents.

Based on these directions, the exhibition covers 3 thematic areas: Ecology, Re-Use and Going Public.
The Ecology section includes the urban forestation idea conceived of by two excellences in the “environmental revolution”: architect Stefano Boeri and scientist Stefano Mancuso. According to Mancuso, “redevelopment with plants is the most effective tool to improve the environmental and social quality.” For this reason, he turned Prato into a case study and worked with his team to conduct a census of the city’s arboreal heritage, using plants as urban sensors. To complement this work, Boeri produced an Action Plan for the Urban Forestation of Prato, with the aim of having one tree for each inhabitant of the city. The section is linked to the site-specific installation Urban Jungle by Stefano Mancuso, a system of bordering ecosystems that evokes an ideal city skyline as a single, enormous urban jungle, beyond the traditional separation between the built environment and nature. “Not only along the avenues, in the parks, in the flowerbeds, and in the gardens, but wherever there is an available surface – roads, façades, roofs – there must be a plant,” says Mancuso.

The Re-Use section opens with a reference, through drawings and historical photos, to the experience of the Prato Laboratory, led from 1976 to 1978 by the director Luca Ronconi with architect Gae Aulenti: one of the first reuse experiments involving manufacturing facilities in view of “a theatre above all acted, based on a place other than the theatre,” in Ronconi’s words. The central topic of the new Piano Operativo is in fact the definition of strategies to transform the existing building heritage, and in particular the industrial archaeology within the urban areas. Following the logic of outlining a sustainable development scenario for the city, the Piano Operativo sets out the intervention methods relating to reuse of the buildings, including them within a broad vision of the city that sees Prato, the “factory city,” as one of the paradigmatic places at international level in terms of re-cycling practices, a dynamic context that can aim to become a European “eco” district of excellence, implementing a circular economy process.

Finally, the Going Public section starts with some shots taken from the photographic project by Delfino Sisto Legnani carried out in 2016, as part of the installation Manufacturing Assemblages in Prato by Matilde Cassani at the Oslo Architecture Triennale, demonstrating how celebrations for Chinese New Year in the historical centre and the industrial district became a spectacular occasion for integration between the city and its different communities. The topic of public space and of a city suitable for its inhabitants runs through the entire Piano Operativo, and interfaces with all the themes addressed by the Plan: from the Cento Piazze to the Riversibility projects, from 5G technology (Prato has been chosen as one of the five Italian cities where it will be tested) to Smart Mobility. Prato therefore conceives of its Piano Operativo from the logic of promoting the idea of an open city, a city of global hospitality accessible to and usable by all categories of its inhabitants.

The projects dedicated to Prato by the photographers Fernando Guerra and Maurizio Montagna meander along the gallery walls and envelop the exhibition space as stage sets. The exhibition includes a selection of the imposing photographic survey carried out by the Lisbon artist Fernando Guerra at the end of 2017 to interpret the transformation phase the city is undergoing, thereby revealing the stratification of the landscape and the many types of city that Prato is constructing, placing attention on the reuse and regeneration of the manufacturing heritage. Imagination and future are two closely linked terms that represent the starting and arrival points for the project Paregon (2018) by the Milanese photographer Maurizio Montagna. Here the attention is placed on the plant world, whose dynamics seems to suggest the path for a new collective action, thereby changing our perspective coordinates after centuries of anthropocentric vision.

The stage designed by Fosbury to accommodate conferences, round tables and spaces to examine the central topics of the Piano Operativo in more depth, from the perspective of participation that has always represented the basis of this new urban planning instrument, is an integral part of the exhibition. An object that becomes a playscape for children and the educational activities promoted by the museum. 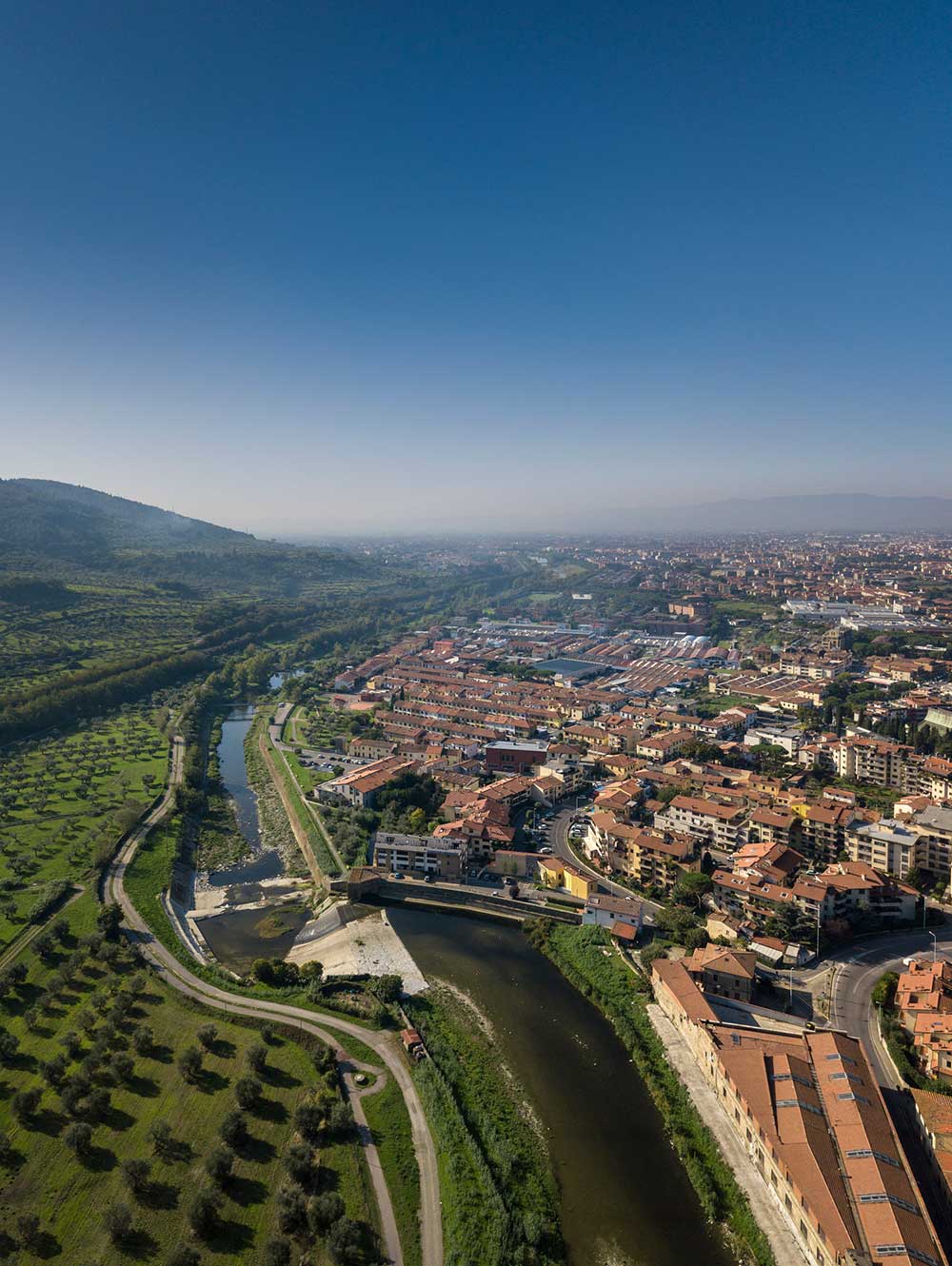 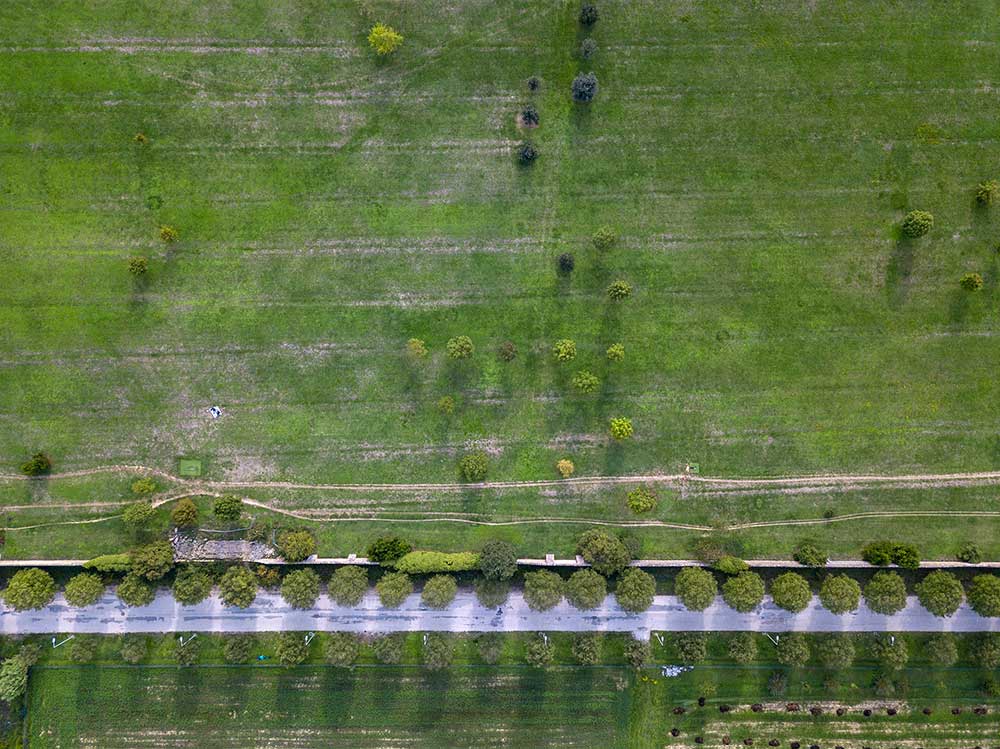