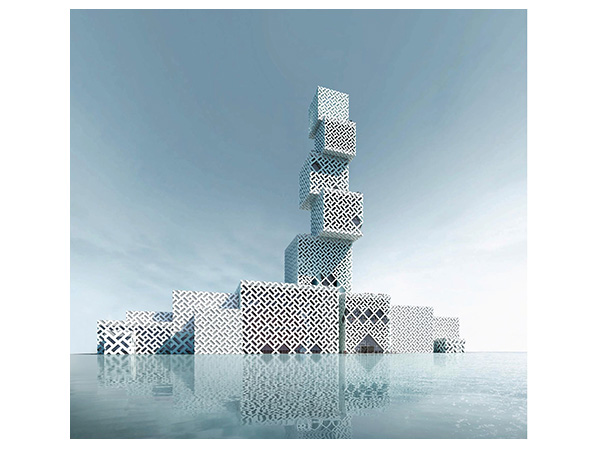 (PresseBox) (Essen, 12.02.2015) Once again, ThyssenKrupp’s mobility solutions have proved to be a fitting complement for iconic structures; the company has secured a contract to provide the inner mobility solutions for the Cube Tower, a unique high-rise building in Foshan, Guangdong Province, including a total of 34 elevators and 16 escalators.

The Cube Tower pushes the boundaries of architectural design and aesthetics and symbolises the new face of Foshan to the world. As the focal point of the city’s new cultural centre, the distinctive building rises to over 143 meters and uses traditional design motifs on its façade that covers 9 vertical cubes of varying sizes. The tower incorporates a theatre and an exhibition hall, as well as leisure, sightseeing, and conference areas overlooking the rest of the cultural complex.

«The Cube Tower is set to be one of the most prominent landmarks in Foshan, and ThyssenKrupp is proud to be a part of mobilising this iconic project,» said Juergen Boehler, Chief Executive Officer of ThyssenKrupp Elevator in China.

Foshan, a prefecture-level city in China’s Guangdong Province, has a population of over 7 million people and aims to establish itself as a development hub. In pursuit of this goal, the city already has an entire zone dedicated to hi-tech development and has pledged to make significant investments in its infrastructure. The new cultural centre is evidence of such endeavours to integrate culture and commerce, reflecting the region’s Lingnan culture while also promoting the quality of recreation, commercial opportunities, and environmentally sustainable infrastructure development. Engineering challenges, ingenious solutions
ThyssenKrupp Elevator plans to complete the installation work at the Cube Tower in July 2015. The unusual shape and structure of this building presents numerous engineering challenges which require ingenious solutions. As a testament to the company’s customer-centric focus, ThyssenKrupp will supply custom-designed cabs to suit the specific requirements of the tower, including two doors per cabin to allow evacuation of passengers via an elevator in an adjacent shaft, while still meeting all elevator safety codes.

ThyssenKrupp in China
Driven by unparalleled urbanisation and the corresponding boom in the construction and transport sectors, China currently has the largest global elevator market with an estimated value of 15 billion euros; the market is expected to provide further growth opportunities. ThyssenKrupp Elevator, which currently operates more than 220 offices and service stations in China, will have over 250 by 2015/2016. This means that the company will have a location in every Chinese city with a population above 1 million.

In addition to supplying 44 elevators and 4 double-decker elevators to the 101-storey Shanghai World Financial Centre, two of its groundbreaking TWIN elevators to the Beijing Olympic Tower, and 114 elevators and 553 escalators across five of the Shenzhen Metro lines, ThyssenKrupp Elevator also has the distinction of providing the fastest elevators in Dalian at the 44-storey Eton Place building in the city. Taking into account all the units under maintenance in the Asia Pacific region, ThyssenKrupp Elevator transports around 160 million people every day – twice the population of Germany.