On a uniquely beautiful – but challenging site in Lebanon.

Karim Nader Studio has released new photos showcasing the ongoing construction progress of On The Rocks, a spectacular concrete and glass retreat sitting on the limestone bedrock of Faqra, Lebanon, at 1,700 meters above sea level. The site, characterized by an almost lunar landscape with scenic rock formations known under the popular name of “houses of ghosts,” is located between ski slopes and Roman ruins on Mount Lebanon, about 1-hour drive north-east of Beirut. On-site construction is entering the homestretch, completion slated for late 2020. 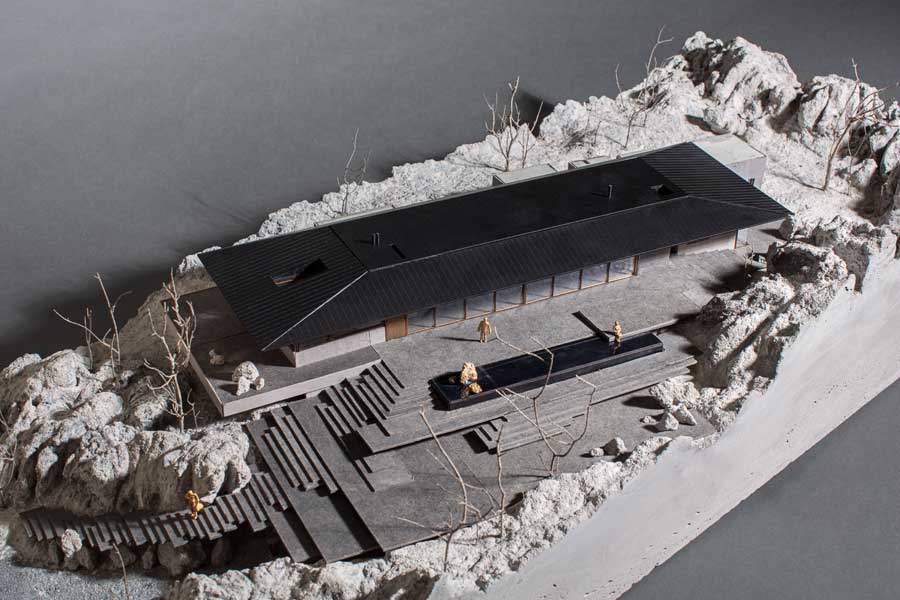 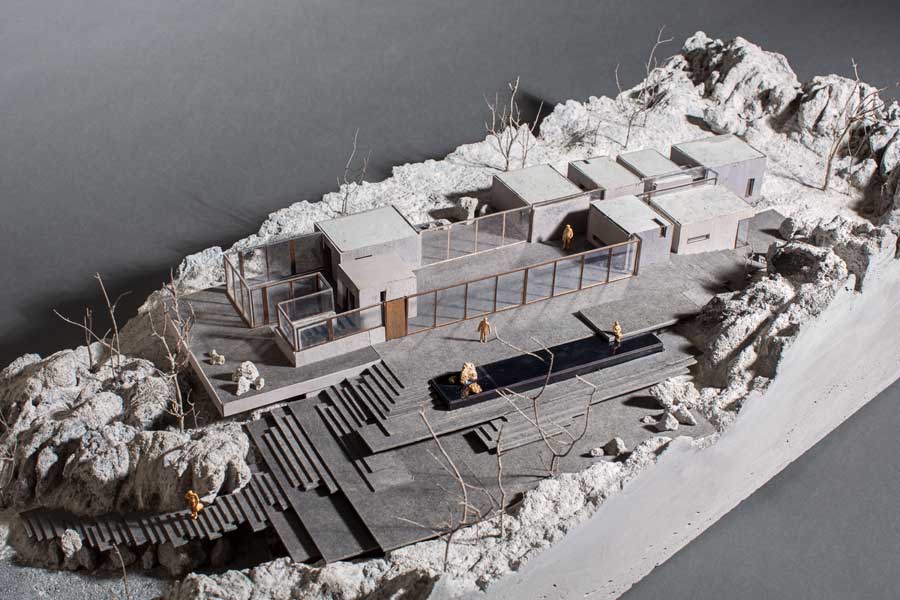 The site
The small town of Faqra might be most famous for its majestic archaeological site, the most extensive of all Mount Lebanon with Roman and Byzantine ruins, and its skiing facilities. Once there, one cannot but be amazed by its limestone landscape, with natural rock formations carved over the centuries by rain and snow. 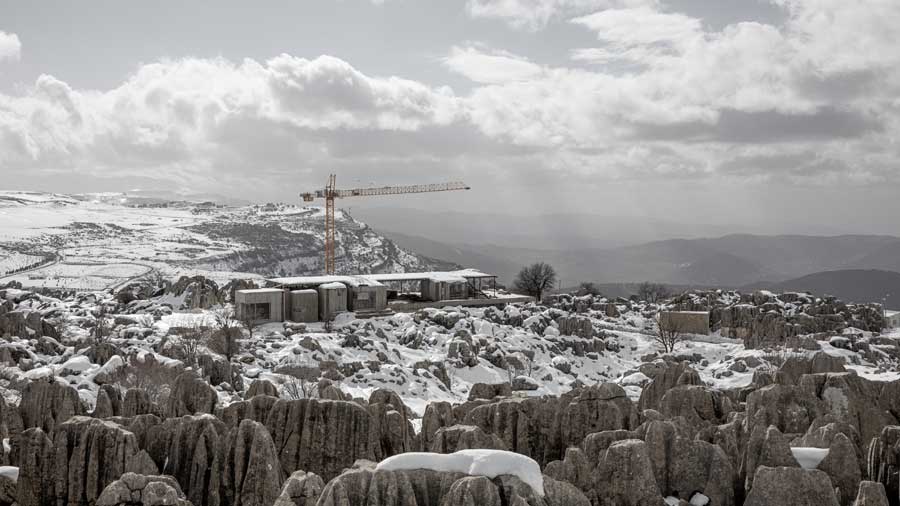 It is here that Karim Nader Studio has designed a new, spectacular retreat residence, deeply inspired and reminiscent of its surroundings. By carefully considering materiality and relationship to the site, the house – due for completion in late 2020 – expands the existing grey canvas of the natural surroundings into man-made fair-faced concrete volumes that accommodate the intimate functions of the house.

A house in dialogue with nature
The house is accessed by a stunning floating staircase that, cascading between the built volumes and meandering around the rocks, seems to be almost emerging from the limestone formations surrounding the house.

The thickness and the overall sense of compactness offered by the concrete enclosures is counterbalanced by a careful use of glass in a dynamic relationship that characterizes all rooms in the house. A zinc roof hovers above those apparently dispersed boxes, creating a seeming enclosure.

“But where roof happens, enclosure disappears, and where enclosure happens, roof disappears. The intimacy of enclosure is here opposed to the openness of an extreme transparency as they do not happen at once in this atypical house,” says Karim Nader.

Each of the three bedrooms, fully cladded in wood to offer a warm environment, opens up to a small patio with a tree, a rock and a selected perspective to the outside.

The living rooms sit under the bridging roof (18m in length) and are bounded by fully operable facades to the north and south, allowing its inhabitants to enjoy sheltered outdoors space in the warmer months. 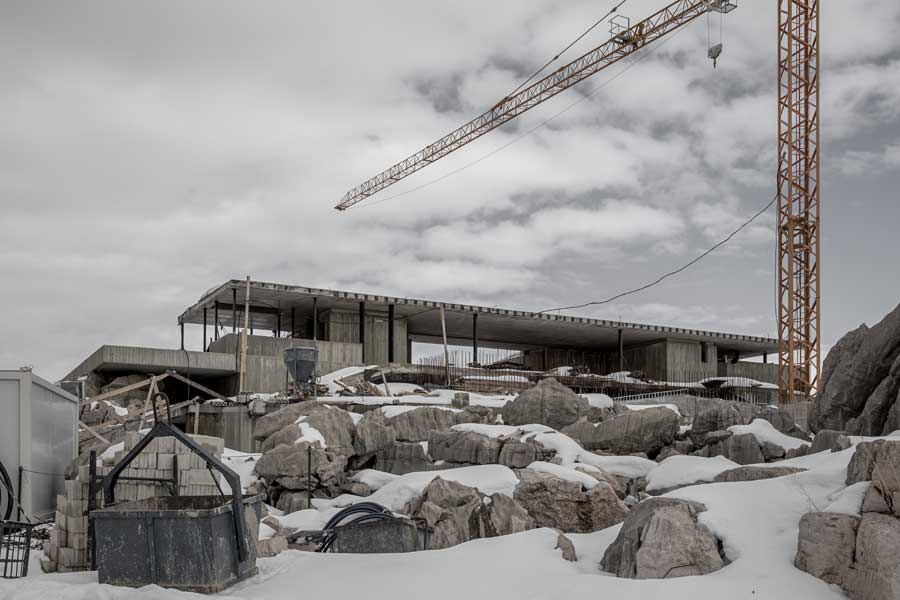 Karim Nader’s philosophy
Karim Nader is one of the most prominent figures in the new Lebanese movement working to uncover the national architectural treasures, whose memories were first erased by civil war and now endangered by the common practice of demolition, in the rush towards modernizing the city. Born during the civil war, Nader is one of the leading exponents of the new cosmopolitan generation eager to create a new conversation between heritage and modernity, hoping to change the attitude towards the past and inspiring a new attitude towards a new golden age for architecture.

Emblematic to this approach is his ongoing renovation project for Immeuble de l’Union, located nearby the Banque du Liban CMA building: a modernist gem built in 1952, Karim Nader decided to preserve its sheer elegance and architectural historical value, avoiding nostalgia, through mixed-use reprogramming, combining commercial ambition with a cultural and historical drive. 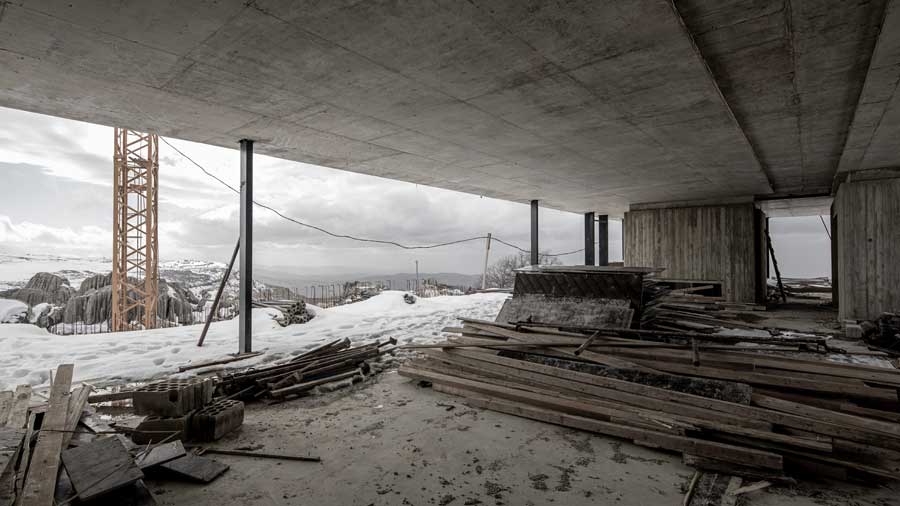 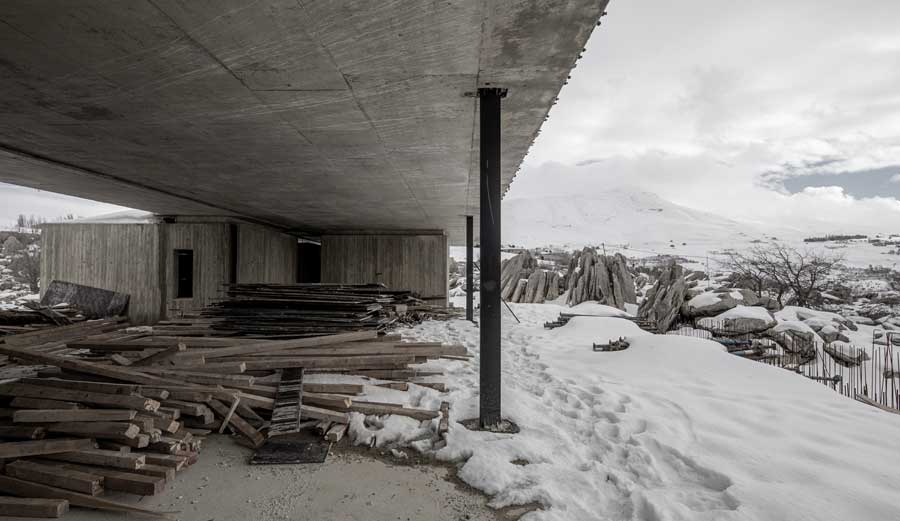 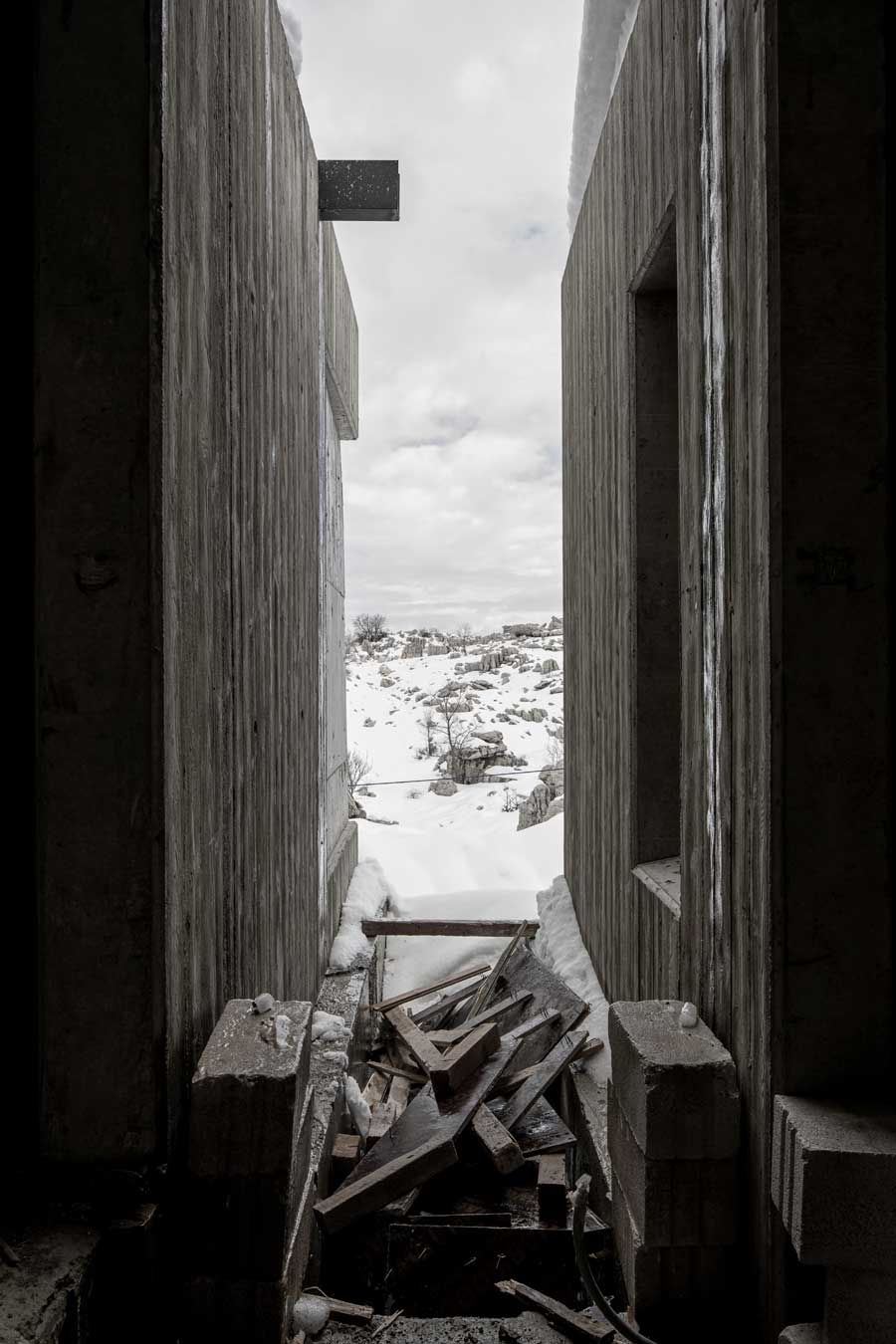 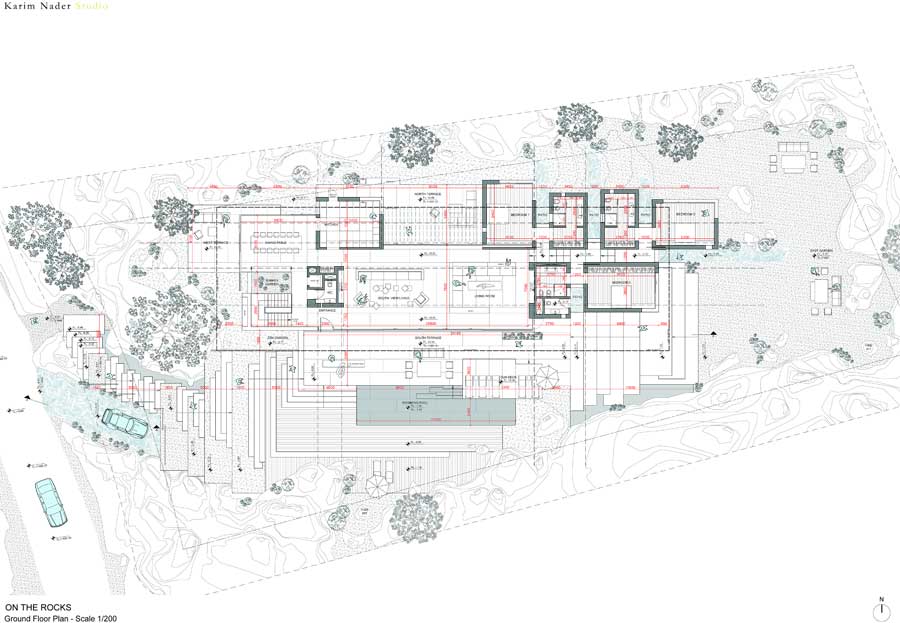 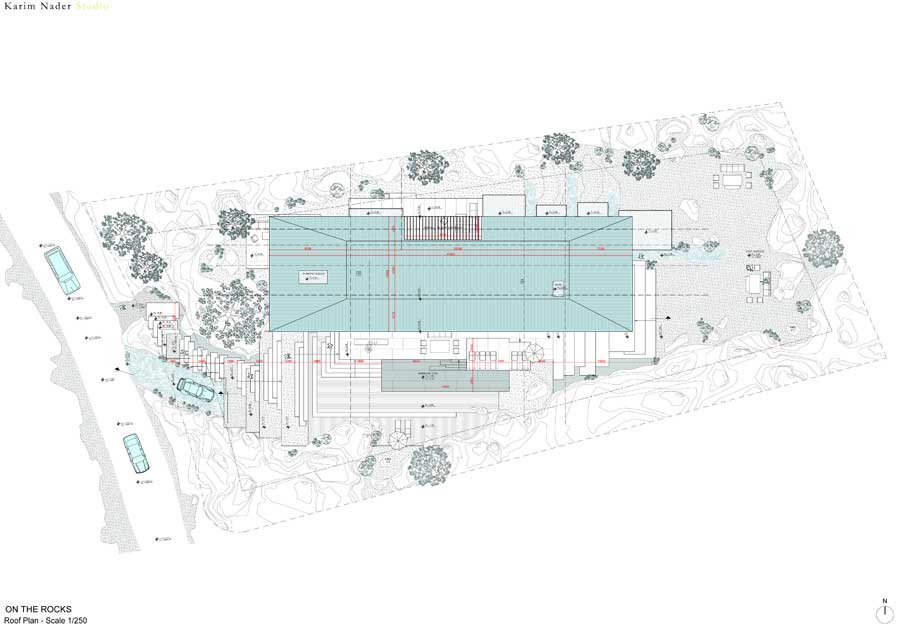